‘It’s just not cricket!’…..my Manuka experience.Blogs » You are here:  Home » 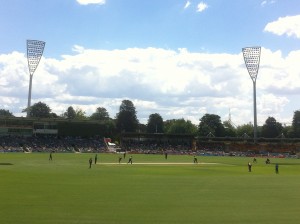 What a historic day it was- Wednesday 6th February 2013- for the first ODI match with Australia featuring in the 100 year Canberra history, all a part of the Canberra 100 celebration. As the historic Manuka Oval was brimming to capacity on a glorious, albeit maybe a little hot day, we were ready to watch our ‘champion’ cricket team take on the Windies. And as can be seen above, this is the first ball of that piece of history!

While I don’t want to take any positives away from the match, the lights, the crowd behaviour, the spectacle etc, the purpose of this post is to share my experience from the average punter’s perspective (and several others whom I spoke to). The  scene for this match had been established some time back, with strong marketing for the 1st match under the new lights, the international line up and the fact that it had been a sellout for some time, so we all knew about 11 or 12,000 people would be present for their cricket fix.

So if I put on my business coach hat, as well as the consumers hat, here are my experiences which were rather disappointing and should never have happened! 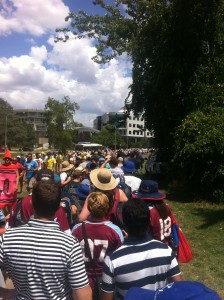 w, while I may be a bit like most people in Canberra and left the arrival close to start time, this was the view that confronted me and many others upon arrival. A line of nearly 150 metres waiting to get in. Will we see the first ball?, had we left it too late?, were all common concerns as we shuffled along. When we finally get the to bag inspection point, what do I find? One girl scanning tickets and being bombarded by arms with tickets attached! Surely Canberra could have had a couple of more scanning machines for a ‘sellout’!

This was where I saw the most anger amongst the natives! From the onslaught of the match, this was the scene at the one bar behind the Hillside Stands. The line up for beer was an absolute ‘joke’. It took between 30-40 minutes of lining up, missing the great batting exhibition while we waited, and waited for our cool refreshment for the afternoon. If this was an attempt at responsible service of alcohol, then it truly succeeded. It got to the stage where the people around us were making a game of it and setting challenges for each other by timing the ‘beer run’ time, and seeing whether a new P.B could be attained for each ‘shout’. At least humour was maintained. I am afraid that the same humour wasn’t met while actually in the line. And all this waiting for Mid Strength!

Why wouldn’t there be adequate outlets by the catering company concerned? They knew it was a sell out, could get good historical data from past catering blunders and other ODI matches in other cities based on per person/ drink ratio….doesn’t sound too hard to me!

Now we all know that every man and his dog has a smart phone (except for one relation who came with us, and sticks by his ‘phone phone’), and that most people want to text, Face book, Tweet, and god knows, call people while at the cricket. We LOVE to share stuff.

Upon the above two points, I attempted to tweet photos, to post photos, and even email stuff to various social media platforms, but nothing happened, the entire match! All that happened was my poor old iPhone was chugging away attempting data connections for so long, that the battery was dead by 4.30pm! I was out of contact! Oh No!….a tragedy in itself.

Again, to keep kicking the dead horse, but surely, with 12,000 people expected there must have been some consideration into boosting the signal or transmission capability, or whatever it is the telephone techies do? Clearly not! 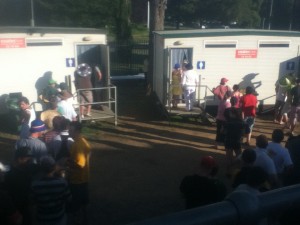 This photo was taken at innings changeover where the beer line was still going strong, and now the toilet line for the four, yes that’s right 4 toilets (2 male, 2 female) doors for the Hillside Stands were getting a good workout. Another logistical joke that my 9 year old son could have improved on with basic Grade 4 maths! To add to this, at 8.30pm the toilets all had printed signs placed on the outside stating they were closed and use more located several hundred metres away. The real brick, permanent toilets located next to these temporary ones, were NOT EVEN OPEN for the match! Work that out! And the final piece of awesomeness, was at 8.30pm the security guards were directing males around behind the toilet blocks to do their business there along the fence (earlier I saw them chasing away people from doing the same to those who attempted to jump the line up). I won’t even go into the state of, or the stench of the toilets from mid afternoon! And for all the clever people out there, this was nearly 6pm, and my phone was dead, so this photo was taken from my son’s iPod!

One final general whine, which may be overkill, but as I was enjoying the scenery of the beer line early on, and my battery was down to 20% I saw the coffee shop ladies with an iPhone charger. I left the line  seeing as though they had no-one at their store (see photo). 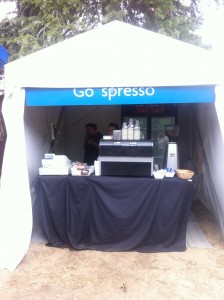 I kindly asked (couldn’t have been alcohol affected as I couldn’t get any) if I can charge my phone briefly while I wait for beer. “Oh no, I only have one charger and I’m using it” was the reply. Fair enough I guess, and maybe they didn’t want to create a precedent, but I didn’t think it was such a bad request to help out for 10 or 20 minutes considering they had no customers and I was really nice..Anyway, the consensus of the beer line was I was harshly done by, and they would know!

So that’s my experience. The bottom line is this.

Surely they (the organisers and caterers) must have known what to expect and should be the professionals (that is their job- to cater) in knowing how to forecast, project, execute and plan for such an event. If Canberra is to have more big events like this, better execution needs to occur. These things truly deflect the greatness of the event, and yes I did still have fun and am proud to have been a part of it.

A final piece of praise- ACTON Buses were great from all my experience. I got there no problem from Gungahlin on the free shuttle and while there weren’t any cab ranks (was told to walk to Manuka shops by security), I asked a bus driver when their buses left and he took us down to a parked bus, put us in and took us to the city-(all three of us on an empty bus). At least someone got it right.

Would love to hear your views, or was I just unfortunate in all my interactions?