Let’s face it, Australia is a pretty cool place, with lots of great bars, restaurants and cafes of which we can go and enjoy ourselves with friends and family. Unfortunately though, in most cases an afternoon out can quickly add up to a substantial sum of money and this behavior cannot be repeated multiple times each week for the average Joe. In addition this whole experience can be made more negative if the service or the food is below standard!

Enter Meads Bar in Nusa Dua to give a great example of how to not only entice, but to keep and more importantly to get the return business.

Having arrived late into Bali on Friday night we met up with my two school mates and their families (all with adjoining suites and very much like an un-named beer advert scenario currently on our TV screens), we did our pleasantries and then those words came out, “Oh well, guess we should go to the pub then!”. Of course this was more to celebrate than anything else, as this was my 44th birthday after all AND my footy team were playing as well so the mission was easy – find cold beer and AFL close to us in Bali.

Luckily one of the group arrived a few days earlier and had checked out the scene. He had seen signs for AFL live at a place called Meads and was close by. The boys headed off with the kids and the girls to follow later. We didn’t realize our walk would be a 30 minute death trap along shonky pot holed filled roads, with trucks, cars, bikes and buses coming within a bees ##@ of us at each passing. But alas the big satellite dish could be seen and we had arrived. It was from here that some very distinct comparisons to the same experience in Australia occurred.

We were greeted at the gate (outside the door and on the road) by 2 young friendly girls welcoming us in, and they then fussed over the kids, the table setting and the best spot to watch the footy. Alfie the Manager I assume introduced himself to all and got all our names, said we should have called and they could have picked us up and offered to get the girls – they can walk we said)

Cold towels arrived for all to clean and freshen us up.

A bucket of Bintang was brought out on ice within the first minute and this was after being suggested as a cheaper option than buying 3 individual beers- why not we said!

Wi-Fi passwords were given and all the kids were into an epic linked up online game of Minecraft of something, so there was the childcare taken care of.

Footy was on and we were set.

We had written off any chance of the girls arriving due to the walk (we did tell them and think it was ‘just down the road, so don’t get a cab’), but alas they arrived about an hour (or 4 buckets of beer) later. Again the greeting ritual along with towels and drink menus took place and even Alfie had a chuckle with them and dobbed us in by saying he offered to come and get them but we said they wouldn’t arrive- thanks Alfie.

Food was ordered for the kids and the BEST ever chips arrived, of which about another 10 bowls were ordered throughout the day – I didn’t say it was a ‘healthy’ day!

To cut a long story short, we had a constant flow of drinks for the day without asking and with proactive service rather than reactive or having to look for it. The menus were attractive, appealing, great seafood options and high quality, and had the story of Meads in the front and the photo was the guy who had been wandering around saying hi, hanging out, checking all was ok etc. He was the owner – Warren Mead who has a long history of some top class eateries in W.A including Coco’s which I frequented many times when living in Perth and this gave real confidence in the quality of the food. Read his story here www.meadsinbali.com 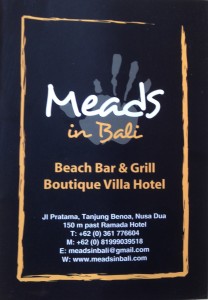 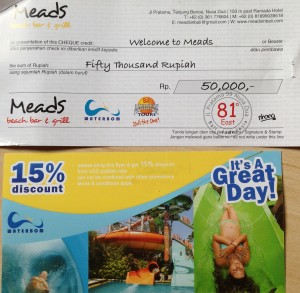 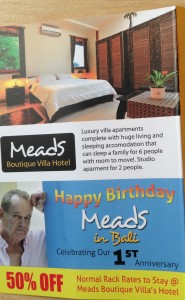 We advised Alfie that we were ready to go so he arranged 2 vans to take us back to the Conrad in air-conditioned comfort, so we finished off our last beer while the bill was prepared.

It was here that the repeat business strategy kicked in.

A bi-fold card with info on Meads was given to us, with a voucher for discount from the Water Bom Park, and a 50,000 Rp discount voucher for next visit, along with info to call and book transport etc. While the amount mightn’t sound much, it is in the scheme of things, as we spent about 1,800,000 for the entire afternoon…yes that’s right, drinks, kids food, more drinks, and lots and lots of chips was about $AUD 180. So that voucher would get a couple of beers each if we combined them next time.

The whole day was a great way to spend in comfort watching the footy for my birthday (and North Melbourne even won), and although it was great value the biggest impact on us was the service, ambience and quality, not the price! So this got me thinking- would I frequent similar places here if given a similar experience and the answer is ‘yes’ and I do. I love going to a place where you are made to feel like a part of the place, where they get to know you, where thy look after you- in fact where ‘service’ is offered.

Now I know some sceptics may say you cant compare as things are cheaper in Bali and labour is cheap (average income approx. $200-250 p/mth) and therefore they can do it better…BUT…this isn’t about the price, and there wasn’t an abundance of labour- just a few really, really good ones, with a Western Owner and Manager, a Chef and great food which I am sure isn’t at the low end. So yes, labour may be a smaller equation on the P&L than here, but they still have rent, utilities, food costs etc, the difference was in the attitude to serve and to care about the customer to win them over.

As a tourist and a customer – hats off to Warren, Alfie and the team at Meads Bar…keep it up as it was brilliant and a few lessons for others.

We did go back the next day (by cab) and this time we ate full meals and maybe had some more buckets of Bintang, used our vouchers- got more, declined the ride home and cabbed it and had another ball, so consistency was there and this time no Alfie, so it works with or without him.